JoJo’s Bizarre Adventure? What? Why bother reading about that miserable Joestar family? Everyone knows DIO Brando is the true star of the series! His reign over the lower life forms will be immortal! 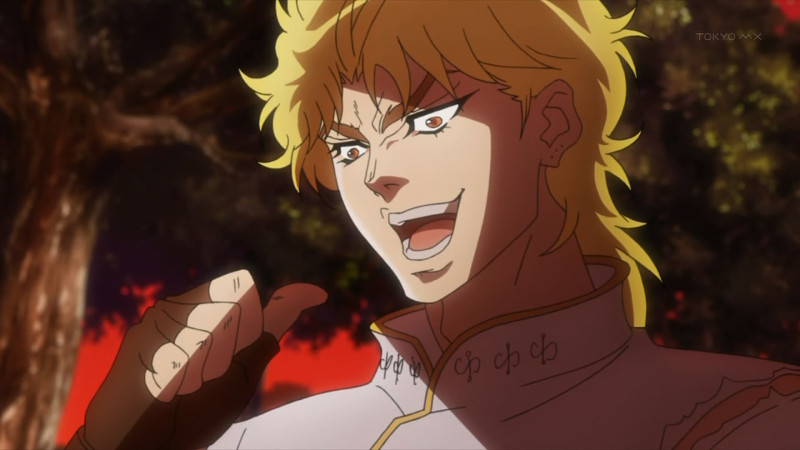 “You thought Tristan was the author of the article, but it was me, DIO!”

JoJo’s Bizarre Adventure by Hirohiko Araki is one of the longest running manga series ever, having started in 1986 and STILL UPDATING. It is also the father of the modern shonen genre (it’s the sort of series that Dragon Ball Z was intended to parody), establishing many of the tropes that stay strong today. With its blend of action and supernatural horror (plus a rather…unique aesthetic), it has been a massive hit, influencing and referenced by countless other series.

Benimaru from KoF is designed after John Piere Polnareff. Personas (from the Persona series, natch) are basically just Stands (hell, Personas are even influenced by the major arcana, just like the Stands from Arc 3). DBZ Abridged references it when Guldo drops a steamroller on Krillin. The list goes on. This series is a classic, and is definitely required reading for anyone serious about manga. 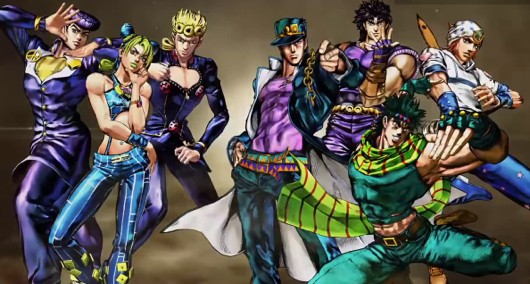 But is it good?

Jojo’s Bizarre Adventure is very good. It’s also really dumb. But the story arcs are good! But it has that particular brand of 1980s dumb to it. But the dumb helps keep it from getting too serious! But it does so in some very juvenile ways. But the dumb gets less dumb in the later arcs! Hamon is cool! Stands are cool! Jotaro is an unbelievable badass!

Long story short: JoJo’s Bizarre Adventure is that mix of awesome/stupid/flamboyant stylish that is the domain of 1980s/early 90s action flicks combined with a solid dose of supernatural horror. If you’re the sort of person who loved Kung Fury, or knows exactly what to expect from an Expendables movie, you know what I mean. It is at once a very typical example of its genre while at the same time being an incredibly original and unique work.

With the first three arcs finally getting an anime adaptation, plus a big push to reprint the manga (including the earlier arcs which were not originally released in the US), now is a very good time to pick up JoJo’s Bizarre Adventure. What do I mean by arcs? Strap in, bucko: You’re in for a wild ride.

A story told over generations

Such a long running series must, simply by virtue of lasting so long, tell an equally long story. Of course, a longer storyline also means more things to keep track of, and it can be easy for things to get out of hand. JoJo’s Bizarre Adventure manages this by breaking its story into arcs (the eighth arc, titled “JoJolion” is the current arc). Each arc is set in very different times and places, all the while following the bloodline of the illustrious Joestar family.

This also, very neatly, deals with the issue of “shonen power creep” (characters having to get progressively stronger to deal with/be legitimate threats), something that many of the series it has inspired struggle with. While you can start the series from almost any arc, I recommend starting from the beginning. That way you get the full experience of following the Joestar family through the ages. If that proves too daunting for you, here’s a quick, spoiler-free run down of the different arcs:

This arc sets up pretty much everything important for the first three arcs. Taking place in late 19th century Britain, it introduces us to Johnathan Joestar, Dio Brando, Hamon energy and the stone mask that would forever twist the Joestar family’s destinies. It also introduces Will A. Zeppeli and Robert E.O. Speedwagon, firmly setting the precedent for characters and stands to be named after musicians/bands. This is one of the things lost in some of the english translations which, for copyright/licensing reasons change some character names.

My personal favorite arc. Taking place in 1938 (50 years after arc one), Battle Tendency follows Johnathan and Zeppeli’s grandsons, Joseph Joestar and Caesar Zeppeli, in their quest to destroy the Pillar Men. The Piller Men are the ancient, supernaturally powerful creators of the stone mask. Having awakened after a millennia-long sleep, the Pillar Men scour the earth for the Red Stone of Aja, the only thing that can complete the stone mask and give them mastery over all life! This arc stands out for its unconventional hero, international travel (which is also a big part of Arc 3) and defeating the big bad in a rather creative way.

Probably the most well known Arc. Set in 1988, Stardust Crusaders deals with the return of Dio, and introduces Stands, the primary plot device of Arcs 3 through six. Joseph returns (albeit older and mellower) alongside his grandson, Kujo Jotaro. These two, along with the fortune teller Muhammed Avdol, the Frenchman Jean Pierre Polnareff (who happens to be on an Inigo Montoya-esque quest for revenge), the student Noriyaki Kakyoin, and the Stand-using dog Iggy must travel from Japan to Egypt and defeat Dio. They only have 50 days in which to do it, however, and will be beset by enemy stand users at every turn. Arc 3 is where the original english release of the JoJo’s manga begins and where the current anime series ends. This is also the last arc where Hamon plays any real part in the story.

It’s been eleven years since Dio was defeated, and everything seems peaceful until Stand users start appearing in the small town of Morioh in Japan. Jotaro, having grown up to become an oceanographer in America, returns to Japan to meet with Higashikata Josuke (the character for “suke” in his name can also be read as “jo,” making him Jojo Higashikata) who is Joseph’s illegitimate son. Jotaro, Josuke and his friends must track down whatever is responsible for the sudden appearance of so many stand users, and in the process will come face to face to face (you’ll see) with the Stand using serial killer Yoshikage Kira! This arc is kind of an odd-ball in that it eschews the traveling theme from the prior arcs and is instead centered around a single location, the town of Morioh. It also has more of a “villain of the week” feel to it, and also includes a character who is obviously a parody of Akira Toriyama’s works.

Vento Aureo is set two years after the end of Diamond Is Unbreakable and takes place in Naples, Italy. It follows Giorno Giovanna (GioGio) who happens to be Dio’s son (how the hell did that happen?) and, because Dio was using the body of Johnathan Joestar at the time, a member of the Joestar bloodline. Giorno teams up with a gang of other Stand users and together they set out to reform the Italian mafia from within. This arc is probably my least favorite thus far, primarily because it doesn’t really have anything to do with the primary storyline, nor does it have any major repercussions on later arcs. If you are looking for an arc to skip, this would be my recommendation.

Okay, now we’re talking. Ten years after the events in Morioh, Stone Ocean introduces us to Kujo Jolyne, Jotaro’s daughter, who has been imprisoned in the Green Dolphin St. Prison in Florida for a crime she didn’t commit. On a visit to his daughter, Jotaro has his stand and memories sealed away by a disciple of Dio’s! Now Jolyne must decide which other inmates she can trust, and must recover her father’s memories and powers before the world can be remade as Dio wished! This series has some of the most badass female characters in manga ever, and ends with the reset that creates the alternate timeline used in the next two arcs.

In an alternate 1890, the crippled ex-jockey Johnny Joestar must team up with the Rotation martial-art user Gyro Zeppeli to complete the Steel Ball Run, a two month long cross-country horse race from San Diego to New York with a prize of $50,000,000 on the line! Can learning Zeppeli’s Rotation-skill restore Johnny’s ability to walk? Will they be able to gather the mummified body parts of a 1900 year old saint (which happens to gift the holders with Stands) before the nefarious Funny Valentine (who also happens to be the President of The United States) and his Stand-using assassins? 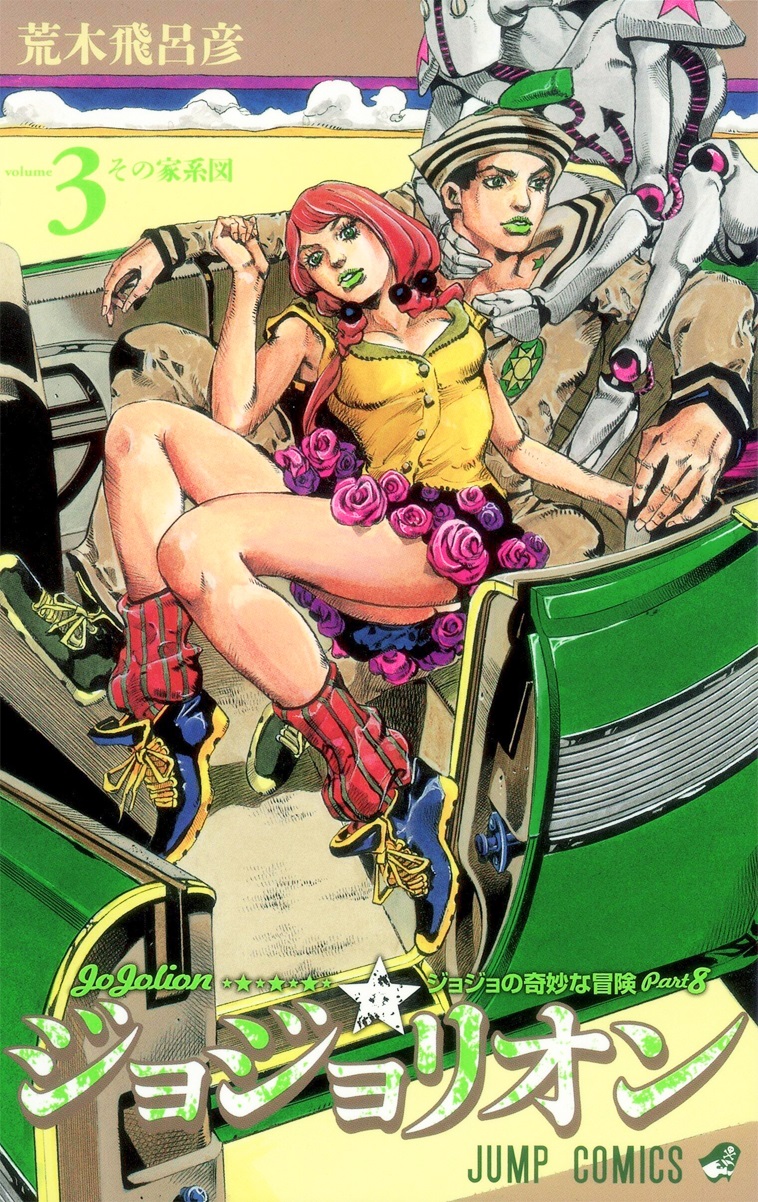 This is the current arc, and takes place in alternate 2012 Morioh, Japan. JoJolion follows a boy named Josuke, who is discovered buried in rubble with only two things: amnesia and the Joestar family birthmark. I personally haven’t reached this part of the manga yet (as of writing I’m wrapping up Steel Ball Run).

Tristan lives and works in southern Massachusetts with his sentient ball of fluff, Bertie. For Threeheadedboy.com, he writes articles, edits video segments and maintains the ThreeHeadedBoy YouTube channel, and is generally in charge of being Hype about things.

Tristan’s Stand is named Backing Track and its power is the ability to improve whatever it touches. For example, touching a pane of glass will make it stronger and more transparent. Touching a car will give it better gas mileage, handling and acceleration. The longer contact is maintained, the more pronounced the effect. After contact is lost, the object slowly reverts to its previous characteristics. While possessing little to no attack power on its own, Backing Track’s true strength shines when paired with other Stands or when Tristan wraps it around himself. It is also capable of repairing whatever it touches, but does so very slowly.